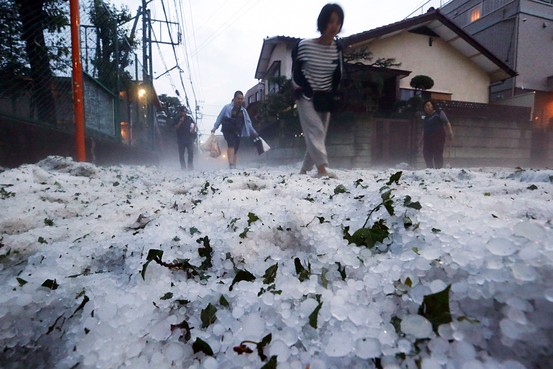 Japan’s Kanto region, which includes the capital Tokyo, was hit by volatile weather Tuesday, including heavy rain and thunder, with hail piling up as high as 10 centimeters in some parts of the capital.

“There was cold air in the upper atmosphere over the city yesterday, which isn’t rare for this time of year. But it remained at the same spot because it was blocked by a front,” a spokeswoman at the weather information provider Weathernews Inc. told JRT on Wednesday. “This caused the heavy and concentrated downpour of ice particles, some as big as 10 millimeters in size.”

Weathernews said the hailstorm peaked around 3 p.m. (0600 GMT), mainly hitting areas in western Tokyo, including the towns of Chofu and Mitaka. Users of the social network Twitter sent out photos of dented cars and broken windows caused by hail.

“Evacuating into a building is recommended whenever thunder or dark…