“The massive storm (map below for 10th 12noon) now heading for Britain and Ireland 9/10th bringing blizzard conditions for most parts and damaging gales or storms in all parts is essentially our top active period 5-8th extended a day or two.

“This will then develop to set up the more Northerly VERY SEVERE SNOW AND BLIZZARD BLAST WITH EXTREME COLD AND GALES for the following period Friday 12th to Tue 16th .  This was always forecast by WeatherAction (from 100days ahead with detail 27days ahead) to be more extreme and severe then 5-8th and that looks like what is going to hit.

“This will probably be the most extreme 5 days of snow blizzards and and gales in Britain and Ireland for 100 years, being more severe than the worst events of December 2010 (which were also correctly forecast by WeatherAction).

“We are releasing this free to the public because of the serious danger.  We offered the BBC the chance to issue this free at the end of November but they refused- preferring to believe the Met Office mild December forecast which we told them would be wrong.

“THIS IS NOT THE END OF EXTREME WEATHER THIS DECEMBER OR WINTER. To help the public and businesses we are now releasing our
Whole-Winter-Now forecast with all updates only £60
(the price it was due to go down to 17th Dec). 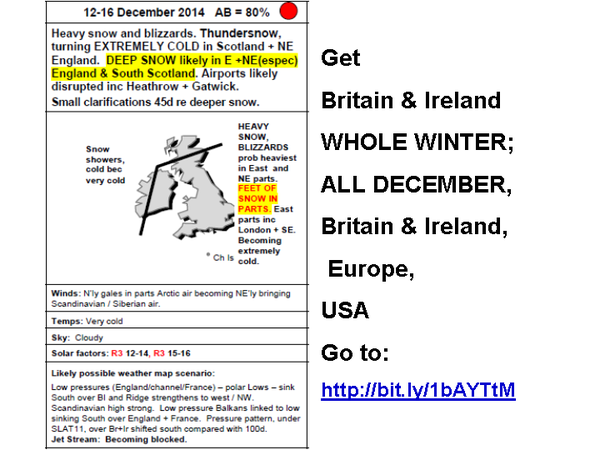 Existing subs get extensions for overlaps with winter months

Thank you for your interest.
Please pass on this information