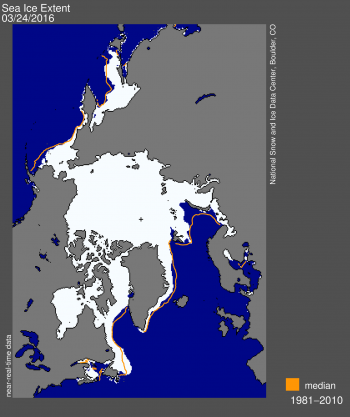 According to Climate Home:

Arctic sea ice fell to its lowest winter extent in recorded history for a second straight year, according to scientists at the National Snow and Ice Data Center and NASA.

Ice cover in the polar region averaged 14.52 million square kilometres (5.607 m sq miles) on March 24, the US science agencies said in a statement on Monday.

Scientists cited abnormally warm temperatures from December to February which spurred melting. Temperatures rose between 2-6C across all regions.

“I’ve never seen such a warm, crazy winter in the Arctic,” said NSIDC director Mark Serreze. “The heat was relentless.”Ice extent grows through autumn to winter, and the maximum usually occurs in mid-March. Sea ice then retreats through spring and summer, declining to…