This is the place for any tips, observations and general chat.

This thread will be left open until next spring (and if winter prolongs like 2013 it’ll stay a bit longer). 😁 [[5 Jan 18 – I believe this is a fair likelihood as any Sudden Stratospheric Warming [SSW] isn’t happening soon and the real cold is likely to backended, although this does not prelude the opposite happening with a long draw of warmth depending which side the Jetstream falls. Battleground scenarios in such an interplay of airmasses likely come into play late season so something akin to famous snows in late March/April, which seem to pop up in the latter part of a decade, fleeting though they are.]]

I’ll also try and keep a weekly diary of the weather which starts below and throw in some images where I can. The most recent will be first.

I am going for a cold cyclonic set up which I believe will be primarily focused on the north of the British Isles although not precluding snow events for the south. In battleground scenarios and with a meridional Jetstream caused by persistent northern blocking, which now looks to be the northern hemisphere pattern setting in, there should be plenty of opportunities for snow – even down south! If snow does fall then temperatures will fall readily, although I don’t see a locked in winter with a ‘big freeze’ lasting more than a week.

My winter forecast, released in October, is here.

Winds have done a roundhouse today, swinging anti clockwise from northwest to west, with snow coming during a prolonged period of continental winds from the southeast.

Things can change quickly and we are entering an R5 period

The changes evidenced by the snap shot I took the Met Office weather warnings earlier. I took this at 2013; 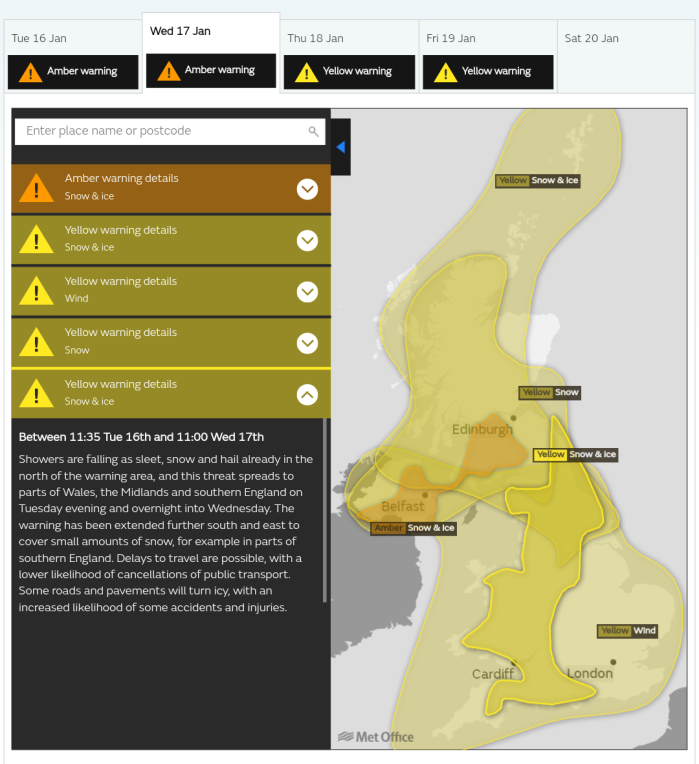 We shall see what will come of it.

Up and down describes the past few days. With more winds to come even in the south.

Low pressure brings movement and energy influencing the British Isles this week. It comes from a cold source.

The return of frosts.

For the past few days have been about movement. New the air becomes still carried with them the constant noise and movement of the winds.

A day with winds that grew steadily lighter and colder, however the real chill didn’t kick in until the sun went down. By then a thin layer of ice was forming on the top of cars, although steady passing banks of cloud allowed this to melt and then refreeze under clearer skies. The still air is wonderfully crisp again.

From Saturday and Sunday a thin layer of ice formed on the top of cars but it remained to windy for a frost form*. It was chilly any winds but not overly cold wind slowly drifting from North East to East, although dew points dropped to their lowest of the week at around -2°C, with temperatures saying above freezing. A bit disappointing as I hoped for some further frosts.

Wednesday although warm thankfully saw some sunshine. Winds slackened and abruptly moved to a West and South Westerly direction. Dew points once again retreated towards zero. As night fell mists rose and a fairly thick but patchy fog had formed by ten with a layer ice on car roofs. By midnight the ice seemed to be retreating somewhat and trees dripped from the moisture in the air.

Around midnight a hard frost had developed, however by morning temperatures had lifted significantly and it was wet. The day had some pretty strong squally showers that I was glad to be indoors during. https://twitter.com/metoffice/status/946873614485176320 Tuesday 2nd Jan 2018 Storm Eleanor

BBC News The Jetstream the past week.

Friday 22nd December Grey. Boring. The cloud did not lift until Boxing Day.

The frost was light and a few snow flurries were seen within the area to start working day, although I was not one of the lucky few as these were further east. 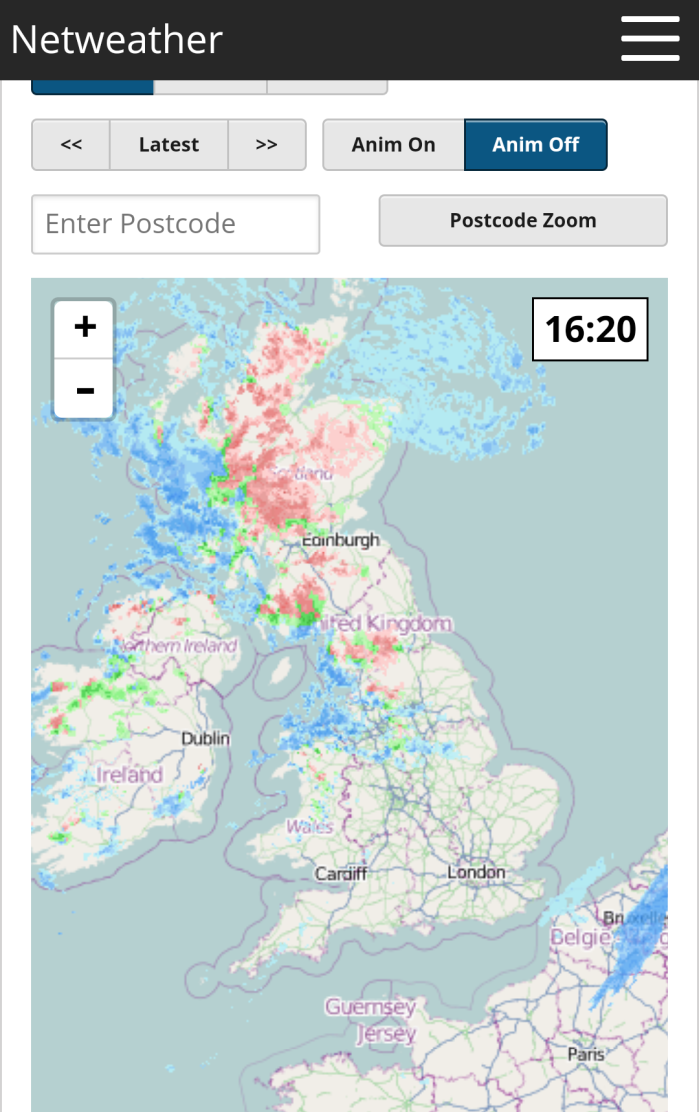 After 13°C the previous day temperatures reached the heady heights of 4°C and dew points were mostly below zero, although briefly nudged above before deciding they couldn’t be bothered and headed down again. A frost after nightfall was noticeable. Winds light and WNW. In Wales thundersnow has been reported; //players.brightcove.net/4221396001/r1mPWQ7cg_default/index.html?videoId=5672839563001&applicationId=MIRROR%20Embed%20Offsite&referrerUrl=http%3A%2F%2Fwww.mirror.co.uk%2Fnews%2Fuk-news%2Fweekend-travel-snow-ice-live-11658674&ttID=5672839563001&plID=r1mPWQ7cg&publisherId=4221396001&videoTitle=Listen%20as%20THUNDERSNOW%20hits%20Nantymoel&videoPublishedDate=2017-12-08T23%3A12%3A58Z&adUnitId=%2F5293%2Fmirror.co.uk%2Fnews%2Fuk-news&correlator=1512778569505&token= Although it is currently doubtful much, if any, snow will make it as far south as the M4, we live in hope that the amber and yellow warnings head further south as Piers Corbyn has been predicting will happen; 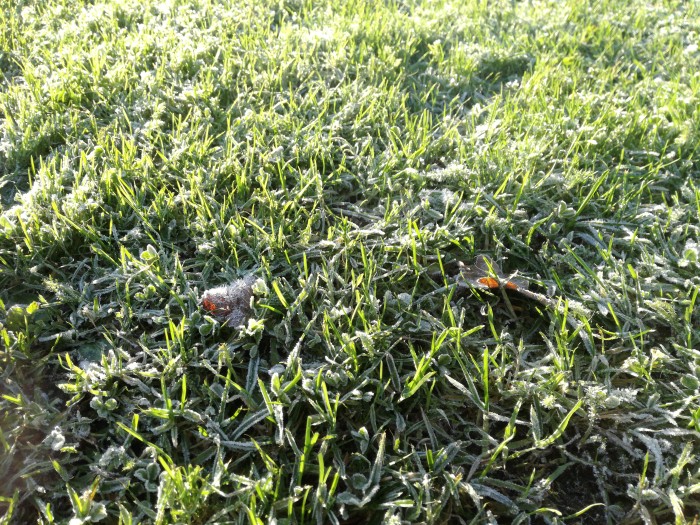 Temperatures reached -2°C overnight and -3°C dew points, rising to a high that briefly touched 4°C before dropping down a couple of degrees where it stayed until past nightfall. This was due to cloud cover that made it feel slightly warmer however once it cleared, bar the odd but high cirrus cloud, temperatures dropped below zero and by 10pm a thin layer of ice was forming on the tops of cars. The radar shows the rain advancing from the west which is coming into the cold air and it looks to be a snow maker, but will the cold air hold for the south? 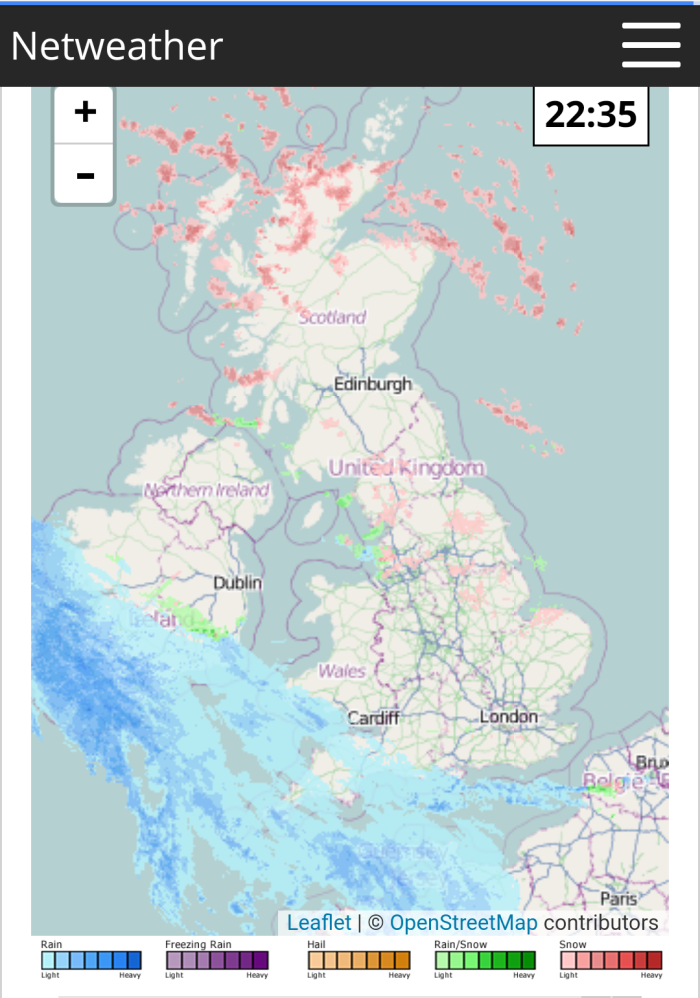 Dew points -2°C and winds light and steady in a slack westerly. By midnight it had clouded over again but it was still cold with the frost growing. The odd snow shower is showing on the radar and you can see sleet as the rain comes up against the block of cold air. 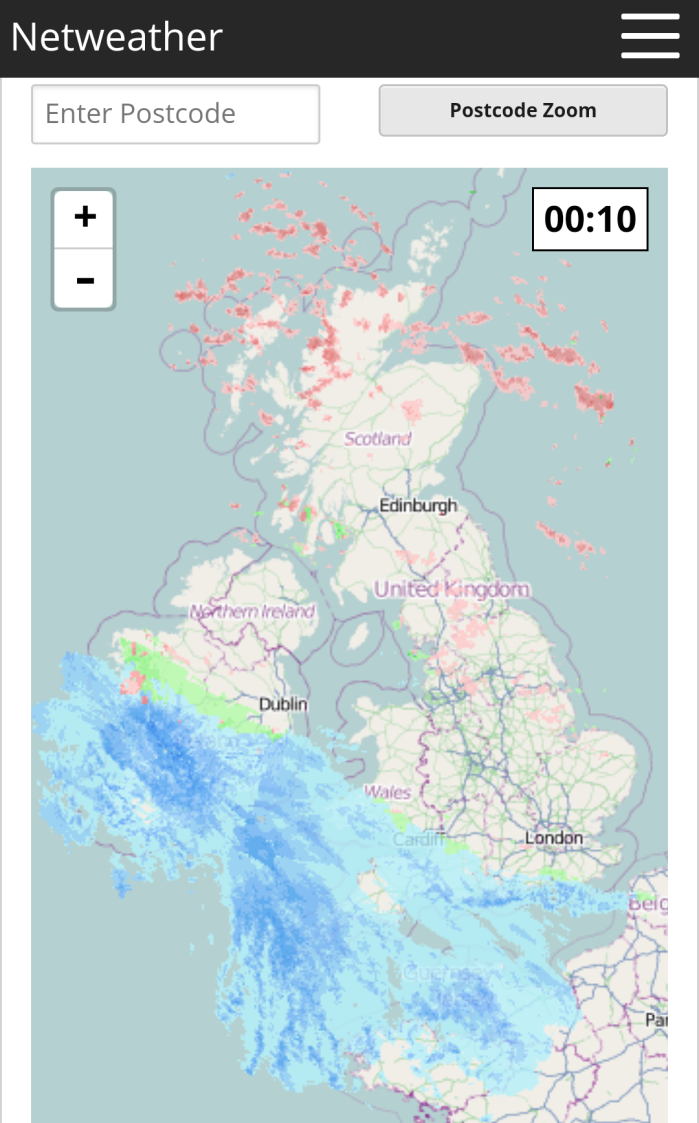 This looks to a long duration event with rain/sleet/snow lasting well into tomorrow evening although it may be light unlike the heavy snow in the warning areas further north with more due on Monday. Whether it settles for any length of time it’s another matter although it’s nice to entertaining these possibilities after a pretty snowless drought since 2014. Sunday 10th It snowed lightly at around 2.30 which settled a thin layer the top of cars and on verges.

Within an hour this turned into rain, until about 7 when the wet bulb and dew points dropped and it stayed snowing heavily for hour which settled about an inch. The system looks be pivoting which may bring back the snow again. Snow looks be the forecast for rest the day.

As a consequence the Met Office not bothering to amend their warning until practically midnight, the roads have not been gritted 😠 https://twitter.com/liamdutton/status/940219815280742400 Frosts: 3 Days with snow seen: 2 Days with lying snow: 2 Piers Corbyn 1 Met Office 0

Overnight NNW/NW winds had picked up and it clouded over preventing a frost at first. Temperatures were fairly steady between 2-3°C whilst dew points rose steadily from Thursday’s lows, as did pressure, but remained below just zero, so a very light frost could be seen on the top of cars. Winds veered NNE for a short while so still a cold day. A cold also start on Saturday, although no frost on the tops of cars could be seen. Dew points slowly rose with the temperatures throughout the day so it felt far less cold as winds shifted to westerly reaching a high of 6°C around midnight. This rise continued through into Sunday and reached 10°C, dew points a couple of degrees behind.

The next few days were fairly overcast and nondescript with temperatures bobbing between 7-10°C, with dew points of maybe 3-6°C and pressure rising and then falling again, winds drifting slowly from a NW to SW influence. Winds began to rise steadily throughout the day on Wednesday ending on a blustery note, although feeling much warmer than the past few days by midnight.

Thursday was quite a remarkable day with Storm Caroline traversing the North of the country.

It started quite miserable with steady but light rain blown in the wind and temperatures as well as dew points were just shy of 13°C by the middle of the afternoon.

However as the rain finally passed, temperatures and dew points plummeted four degrees in a matter of minutes. The clouds moving off to the west were gorgeous. 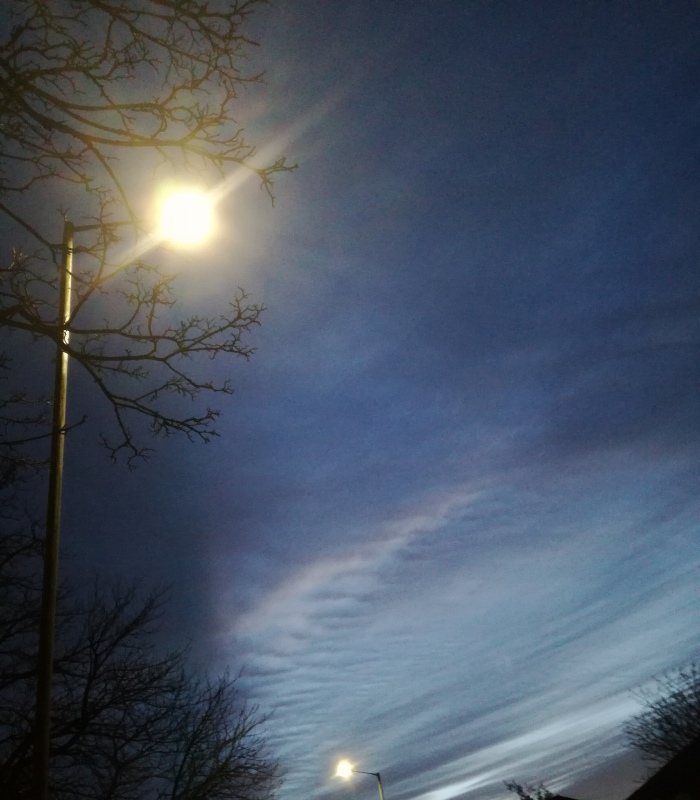 This was the inflection point where pressure began to rise and SW winds shifted to NW. Although it took until midnight for temperatures to drop down to around 2°C, dew points took barely an hour as skies cleared so it was noticeably cold again and a trace of frost was again on top of cars by late evening.

Temperatures dropped away quite fast after the passage of cloud on Friday afternoon and frost formed as soon as the sun set and by midnight ice crystals had formed at grass level – the first clear time this winter. It was moderated only by the incursion of cloud ahead of a light rain band coming from the NW turning to sleet and snow as it progressed SE, all of which passed away from here. 😱

Thursday started with a frost rising to a high of 4°C with dew points at -4°C so quite parky, especially in any winds. Had the feel of snow in the air, clouds looking like it too, but not even a flurry. Liam Dutton posted snow flurries in London on Twitter this morning https://twitter.com/liamdutton/status/936196020471582720

Parts of eastern England have been blanketed in a layer of snow as forecasters warned of possible disruption and plunging temperatures. After no real snow on the coast of East Anglia for about four years, this was the scene on Southwold beach in Suffolk at dawn:

High pressure throughout the previous week culminated in a frost under clear skies Friday morning but reached a brief spike of 9°C as rain passed through with winds veering SW to NW back to SW through the weekend, so even with cool nights there was too much cloud for further frosts.

Dew points rose and temps rose sharply at first on Monday then steady crept to a maximum of 15°C late on Wednesday as the winds strengthened with the passage of a low blowing light but steady rain. It sounded strongest for some time in the boughs of the trees but very few leaves seemed to be affected the next morning, although there was a notable increase in broken branches but nothing more than twigs at ground level. With the passage of the winds overnight pressure rose again and dew point temperatures dropped to 3 or 4°C, where they remained more or less the following day as temperatures steadily dropped to just a couple of degrees above that.