In a recent post, English vineyards introduce new grapes due to global heating- Grauniad, Paul Homewood highlights a predictably 1984 inspired piece of fiction by the Guardian, which includes this whopper:

As we shall see that is far, far from the truth and illustrates the historical illiteracy of so many in the media and academia.

It is appropriate to include in this section a note on the cultivation of the vine and on wine making in England, particularly in the Middle Ages when many vineyards were maintained in central, southern and eastern England south of about 53°N, since consideration of them has been used (LAMB 1965) in deriving information about the temperatures then prevailing. The distribution of the former vineyards is indicated in fig. 13.74. 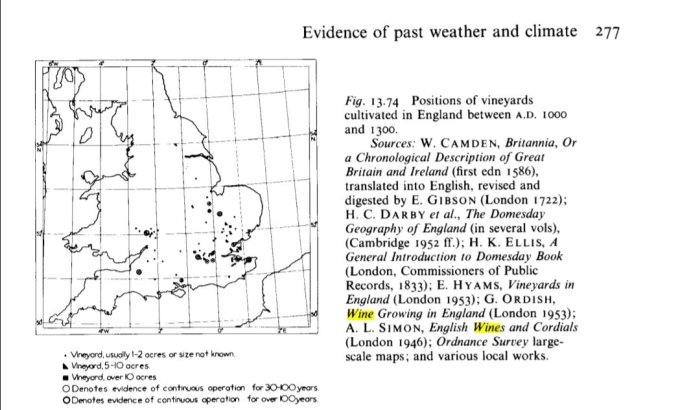 Their northern limit parallels but lies about 500 km farther north than the modern limit of commercial vineyards in France and Germany. The success of the English vineyards in the period from about A.D. 1100 to 1310 was such that the French trade sought to have them abolished under an early treaty of peace with England (ELLIS 1833). Some of these vineyards were, in fact, operated for several hundred years, though decline set in and very few new ones were started after 1310. From WILLIAM OF MALMESBURY’S description about the year 1150 of the vineyards in the Vale of Gloucester and at Thomey near Peterborough, the vines were cultivated in the open, trained up upon poles and not protected by walls. 1

For a good grape harvest the vine makes the following climatic demands: (1) freedom from late spring frosts, especially at and after flowering, (2) sufficient sunshine and warmth in summer, (3) not too much rain, (4) sufficient autumn sunshine and warmth, in regions where the summer is only just warm enough, to raise the sugar content, and (5) a dormant winter season, in which frosts are seldom serious.

Severe frosts have affected the northern limit of vineyards in France and Germany in a few of the most extreme winters – cultivation was never resumed in some parts of France after 1709, and the winters of the 1430–40 decade may have had a similar outcome both in France and Germany, Probably a prolonged period of frost with extreme temperatures below – 20°C to – 25°C is required for this to happen, Such temperatures have occurred in some of the former English vine districts, but it seems likely that (with the possible exception of Ely in the 1430–40 decade) such frosts only occurred after cultivation had already been given up, Severe frosts are less likely to have been the limiting factor at any stage of theclimatic decline in England than on the continent. The figures in Tables 13.16 and 13.17 suggest that it was cool springs, May frosts and to a less degree lack of summer warmth that in the end told against the vine in England. 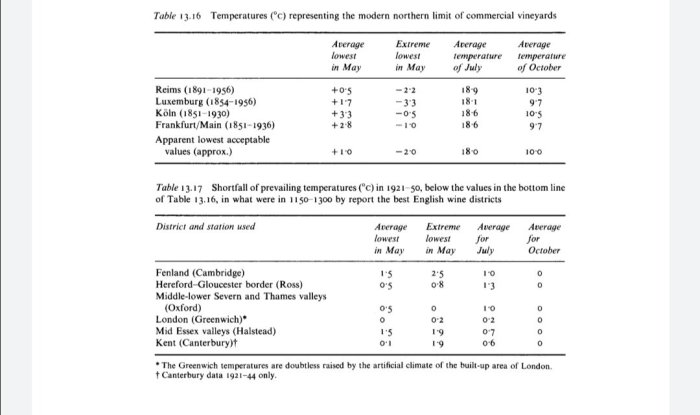 Table 13.16 gives relevant climatic values near the modern northern limit of commercial vineyards, and Table 13.17 indicates how far twentieth century temperatures in the best of the former English vine districts appear to fall short of the lowest values required (it is true that individual enthusiasm has succeeded in operating, often (but not always) in walled gardens, isolated vineyards in specially favourable sites in the south of England at one time or another in most centuries since the Middle Ages; these have never continued long after the retirement or death of the founder.) It is reasonable to deduce that in the medieval warm period, at least between A.D. 1150 and 1300, and probably between 950 and 1050 also, the temperatures prevailing in the English vineyard districts were higher than twentieth century values by about these amounts. Frosts in May were surely much rarer.

In central Europe also vineyards were found considerably farther north than now. Between 1128 and 1437 wine was produced in East Prussia, even at Tilsit (55°N), also in Brandenburg and in south Norway. In the Black Forest (Schwarzwald) there were vineyards up to 780 m above sea level, whereas the highest vineyards in Germany today reach 560 m near the Boden See (Lake Constance). The English medieval vineyards were nearly all less than 100 m above sea level, though one exceptionally favourable site is suggested at 200 m in Herefordshire. These figures for the height difference between the upper limit of vineyards then and now, taken in conjunction with the usual average lapse rate of temperature with height in the summertime of 0·6 to 0.7°C/100m, suggest that in central Europe the average temperatures over the summer half-year in the medieval warm epoch were 1.0 to 1.4°C above those in this century and that in England the difference was fractionally less, probably in the range 0.7 to 1°C.

1. WILLIAM OF MALMESBURY described the vineyards in many districts of England in his book De Pontificibus, written about A.D. 1150. Of the vale of Gloucester he wrote ‘here you may behold highways and publick roads full of Fruit-trees, not planted, but growing naturally. , , . No county in England has so many or so good vineyards as this, either for fertility or for sweetness of the grape. The wine has no unpleasant tartness or eagerness; and is little inferior to the French in sweetness’ (from the translation in CAMDEN’S Britannia in the English edition by E. GIBSON, London 1722). The description is thought to have applied particularly to the hilly country near the borders of Gloucestershire, Herefordshire (Plate IX) and Worcestershire where the soils are similar to the red grits and marls of the Rhine and Mosel valleys, which the English wine of this district probably resembled most in flavour. Ledbury area had some of the vineyards that were longest maintained.

One thought on “The English Medieval Vineyards”