The results show that although the CMIP6 models present some encouraging improvements when compared with CMIP5, most of them still fail to reproduce the warming slowdown. They considerably overestimate the warming rate observed in 1998–2013, exhibiting an obvious warming acceleration rather than the observed deceleration. This is probably associated with their deficiencies in simulating the distinct temperature change signals from the human-induced long-term warming trend and or the three crucial natural variabilities at interannual, interdecadal, and multidecadal scales.

It’s not our theories, we need more money 🙄 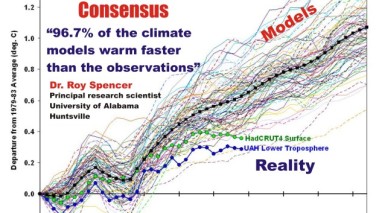 Explanation, or vague excuses? They seem to be saying the models are a wonder, just a shame they don’t reflect reality – mainly due to pesky natural variation.
– – –
A new study led by Dr. Wei and Dr. Qiao from the First Institute of Oceanography, Ministry of Natural Resources provides an evaluation of the performance of the newly released CMIP6 models in simulating the global warming slowdown observed in the early 2000s, says Phys.org.

This study reveals that the key in simulating and predicting near-term temperate change is to correctly separate and simulate the two distinct signals, i.e., the human-induced long-term warming trend and natural variabilities, especially those at interannual, interdecadal and multidecadal scales.