As one of the comments below states: John Kerry is doing a non stop world tour in his jet to get the temperature back to a profitable level.https://youtu.be/FpZhmo4Bvqw

A very good overview of what's going wrong with some of the long range American weather models and why it's water vapour, not Carbon Dioxide, that is the important greenhouse gas that governs climate. https://YouTube.com/watch?v=BmB3Z7vBhts

David interviews Piers on his thoughts about what lies ahead. https://YouTube.com/watch?v=JRyi_tVWZ2I

Another interesting run down https://YouTube.com/watch?v=acxUgjt9VlY

Europe heat wave attribution to man-made climate change is the same kind of nonsense we saw with the hot dry summers of 2010-12 (and it’s showing up again where and when it gets hot everywhere around the planet). Still, on the bright side, it gives me a chance to show what we know and how … END_OF_DOCUMENT_TOKEN_TO_BE_REPLACED

Certainly something noticeable if you've been watching. It doesn't need the CO2 fairy. https://YouTube.com/watch?v=lku33_7_iI4

The BBC has quite an interesting article on the history of air conditioning which inadvertently shows how deluded some assumptions, twisted by the belief in the carbon dioxide thermostat control knob, can be; I'd happen to agree with many of the more zany ideas akin to a science fiction dystopia where we torch/nuke the atmosphere, in our … END_OF_DOCUMENT_TOKEN_TO_BE_REPLACED

What a relief that there is no model in sight 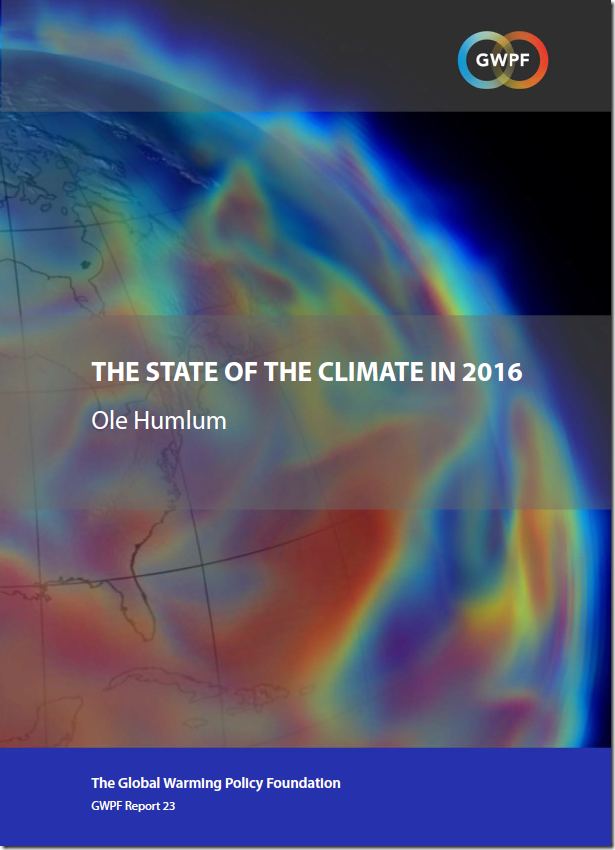 Compiled by Dr Ole Humlum, Professor of Physical Geography at the University Centre in Svalbard (Norway), the new climate survey is in sharp contrast to the habitual alarmism of other reports that are mainly based on computer modelling and climate predictions.

Among the key findings of the survey are:

** While 2016 was one of the warmest years on record, global temperatures dropped back at the end of the year to levels prior to the strong 2015/16 El Niño. This fact suggests that much of the global 2015–16 temperature peak was caused by a one of the strongest El Niños on record.

** Since 2003, the global temperature estimate based on surface station measurements has consistently drifted away from the satellite-based estimate in a warm direction, and is now about 0.1◦C higher.

In his latest post Paul Homewood looks at rainfall trends in England and Wales and finds: "On average, it is fair to say that it is a little bit wetter now than it used to be in the early 19thC. But above all it is the year to year variability which dominates the record, just … END_OF_DOCUMENT_TOKEN_TO_BE_REPLACED

Gav goes through some of the factors believed to effect Northern Hemisphere winters.  https://youtube.com/watch?v=wlmYHh-1kHI

​ While news journalists and internet bloggers are busy headlining scary stories invoking the presumed causal link between anthropogenic CO2 emissions and floods and droughts and global warming, robust scientific evidence of naturally-forced climate change has continued to rapidly accumulate. There is a claimed scientific “consensus” that climate changes in recent decades are only weakly … END_OF_DOCUMENT_TOKEN_TO_BE_REPLACED